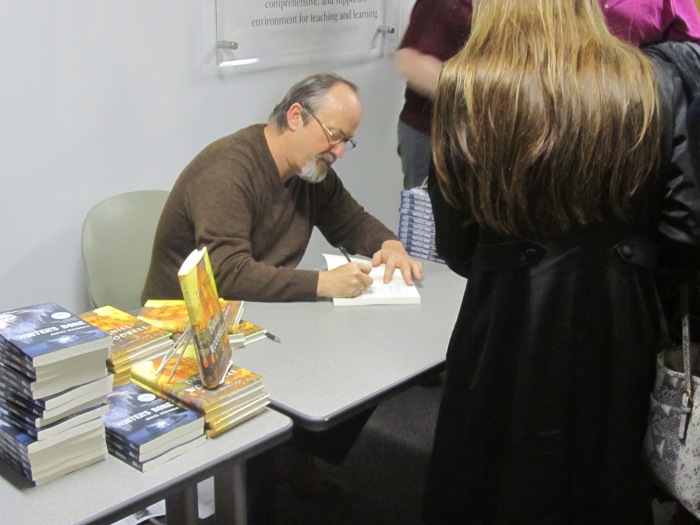 On Thursday, February 20, over one hundred members of the SCC staff, students and members of the community converged in the SSB Auditorium to listen to guest speaker Daniel Woodrell.Woodrell, 60, has written 10 books, several of which have gone on to receive critical acclaim. So far two of his books have been adapted into feature length films: 1999’s “Ride with the Devil,” which starred Tobey Maguire, is an adaptation of Woodrell’s “Woe to Live On” and 2010’s “Winter’s Bone” is based on the novel of the same name and starred, a then relatively unknown, Jennifer Lawrence.

Woodrell spoke for about 20 minutes on his life in Missouri before reading passages from two of his books, “Winter’s Bone” and “The Maids Version,” much to the delight of the audience. A native of St. Charles, he attended Lincoln Elementary School and has memories of Lindenwood University when it was a school of “600 to 800 girls.” Woodrell has been living in the Missouri Ozarks since 1995 with his wife Katie, and the area has served as the inspiration for most of his work. While the Ozarks might not seem like the most interesting setting for a story he stated, “Inspiration for material can lie in the darkest crevices of our own backyards.”

After the readings, Woodrell took questions from the audience, an audience that wasn’t shy in asking him about his Hollywood experiences. He also admitted that he was a high school dropout and his writing process starts with him writing out longhand. When asked which famous authors he enjoyed growing up he said that he “was shoved towards [Mark] Twain” as a child by his mother.

After the brief Q and A session, Woodrell signed autographs for those who brought their own copies of his work, or purchased a copy at the event.

The audience was diverse in both age and ethnicity and ranged from SCC Students seeking extra credit, such as freshman Amanda Sauter, to senior citizens who walked in holding their books and left clutching them to the chest. Additionally, there were a handful of amateur writers who smiled as they listened to the locally based literary hero.

Woodrell was introduced by Virginia Guneyli, Assistant Chair of the English Department at SCC. During her introduction she said, “It’s one thing to be master of the craft, it’s another thing to be a good story teller. Daniel Woodrell is both.”  She  first encountered some skepticism when presenting the idea of getting Daniel Woodrell to be a guest speaker. “He is just so famous” is what her coworkers said. Guneyli credited the teamwork that exists between the different departments at SCC in making something like this happen. “Winter’s Bone” is part of the curriculum in her contemporary literature class, and she explained that it was a student in her class, Jake Germann, who was particularly moved by the book and he wanted to meet the author. When asked about what engaged him in Woodrell’s writing style, the 3rd year student said his work contains “an everlasting presence of darkness.” “In a way, he makes you feel comfortable, [but] he doesn’t give you a way out.” Germann concluded by saying he was “extremely thrilled” to see Woodrell in person adding “His physical presence is certainly different from his literary presence.”

Overall reaction to the guest speaker was positive. Freshman Samantha Schoonover said, “To see from his starting point to how he’s become to be [a famous author]” was “motivational.” Considering Woodrell’s humble beginnings to where he is today in his career this is a fair statement. It would be fair to say that many probably came to hear Daniel Woodrell not knowing what to expect, but all left a little more inspired. Missouri is a state that is no stranger to famous residents; however it is refreshing to know at least one still calls it home.