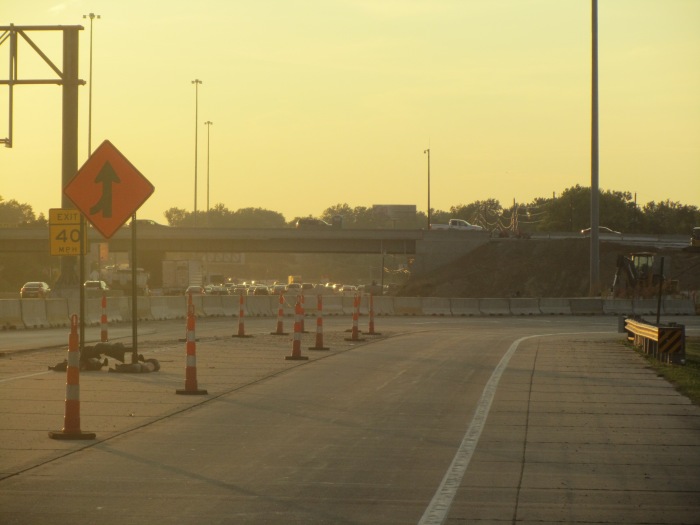 Interchange improvements will be completed by end of November 2013.

With the increase of population in the western St. Charles County in the past decade it is no surprise that interstate 70 has seen an increase of traffic in both east and westbound lanes. The Missouri Department of Transportation (MoDOT) has been handling this issue with an emphasis in safety for commuters traveling through St. Charles County. Before construction began, the congestion at I-70 and Mid Rivers Mall Drive in St. Peters was deemed dangerous enough by MoDOT to warrant a new interchange, constructed by Millstone Bangert Inc. This new interchange will open next month with improvements for anyone exiting or entering I-70 at Mid Rivers Mall Drive for work, shopping or just heading home.

According to MoDOT more than 60,000 vehicles utilize the stretch of I-70 from Mid Rivers Mall Drive to highway 79 on a daily basis and the congestion in the area is a direct result of the number of people exiting at Mid Rivers that extends into the highway during the evening rush hour. The solution will be the first Diverging Diamond Interchange (DDI) in St. Charles County. Utilized to combat traffic congestion issues in France, the DDI lowers the amount of time between stop signal cycles. This set up “is an efficient way to move traffic when there [are] a lot of left turn movements” said Tom Evers, MoDOT Area Engineer for St. Charles County. With a DDI interchange the stop signals work in unison to “flush out” traffic most efficiently as possible. The new interchange will be MoDOT’s 4th DDI, the first was completed in 2009 in Springfield, Missouri and more recently the interchange of Dorsett Road and I-270 which opened in 2010. According to Evers, the interchange of Dorsett and I-270 has succeeded by virtually eliminating the amount of people waiting on the off ramps as well as the amount of cars sitting still on the Interstate.

Construction began in March of 2013, but saw some initial delays due to the late season snowfall and the record rain we had in the spring. Heavy construction began in April and Construction Contractor Millstone Bangert is currently on schedule for the new interchange to open on November 8th.  In addition, Millstone Bangert is currently partnering with Fred Weber Inc. to complete the Page Avenue Extension to I-64 in O’Fallon. Most of the funding for the I-70 at Mid Rivers project came from Federal Congestion Mitigation Air Quality (CMAQ) funds, about 7 million dollars. CMAQ grants money for road project that promote vehicle movement and decrease polluting engine idle time. St. Charles County is contributing $834,000 and the city of St. Peters $208,500, with both county and city sales tax taking a part, as well as MoDOT providing about $4.4 million in cost share funds. Additionally the city of St. Peters is tossing in another $217,000 to dress up the interchange, with these slightly improvements being completed by December. Thus bringing the total project cost to over $12.6 million.

So what else can commuters expect out of the new interchange? For starters, westbound I-70 is adding an additional lane from Mid Rivers Mall Dive to Route 79, allowing drivers merging on from 370 to drive straight through from Mid Rivers to 79 or they will have another mile of highway to make a successful merge onto 70 westbound if their destination is O’Fallon or further west. The new interchange will also allow for quicker access to Main Street in Old Town St. Peters as well as speeding up the process to merge onto I-70 from Mid Rivers Mall. Pedestrians will cross the bridge between the lanes of traffic that will actually place drivers on the left side of the road when crossing the bridge.

I-70 commuters have had to put up with a lot of construction this year between the Blanchet Bridge and this new interchange it might be enough to make you pull your own hair out. “[That] was defiantly considered. We talked about it quite a bit” said Tom Evers, adding that the money for the renovations to the Blanchet Bridge came available within the timeframe that the CMAQ funding came available for the new interchange at I-70 at Mid Rivers, which has to be applied for. According to Evers, MoDOT embraced the philosophy of getting both project done within a certain year, verses getting the Blanchet Bridge renovated in 2013 and reconstructing the interchange of I-70 and Mid Rivers Mall Drive in 2014. MoDOT found a solution that allowed the taxpayers of St. Charles County not to flip the $12.6 million bill on their own. On top of that the shops at Mid Rivers Mall will be happy as the construction will be finished just in time for holiday shopping season, where no doubt will the county’s first DDI will be put to the test.