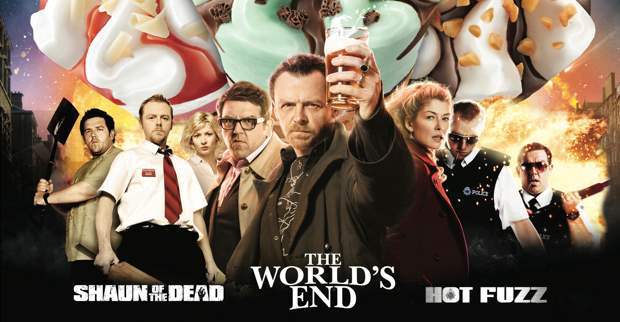 Anything can be overcome with a friend by your side. What started out as a close group of film fanatics making a small movie for local Londoners to enjoy has grown into a series of heart-warming, action packed comedies with a cult following.

“Shaun of the Dead” (2004), “Hot Fuzz” (2007), and “The World’s End” (2013) are the three movies that make up what has along the way been called the Three Flavors Cornetto Trilogy, or the Blood and Ice Cream Trilogy. The trilogy has earned that title with each movie sharing a similar element of action and comedy, violence and friendship, blood and ice cream. The creators of this trilogy, Edgar Wright, Simon Pegg, and Nick Frost, have come a long way from their work in the late 90’s to present day.

Edgar Wright, director and co-writer of the trilogy, first worked alongside Simon Pegg, star and co-writer, on the 1999 television show “Spaced,” where he met Pegg’s good friend and fellow actor, Nick Frost. Since then, the trio have been best mates and professional artists in their rise to cinematic fame.

Each film is combines two sub-genres of filmmaking with British stylistic action and comedy for all to enjoy.

-“Shaun of the Dead” is a romantic comedy with zombies concerning a young adult constantly defending his best friend and trying to please his girlfriend, while living up to his flatmate’s and stepfather’s expectations of himself. Everything seems to be slipping from his grasp. In his attempt to deal with his struggles, his best friend takes him out for a night of heavy drinking. Nothing is the same when he awakes hungover to see that his city has been overrun by the undead preying on the living.

-“Hot Fuzz” is a buddy cop mystery dealing with a superior police officer who is banished from the Metropolitan Police Force of London for being too good. He is then sent to a little village to start life anew. The lonely police sergeant befriends his Chief Inspector’s son and fellow officer, a simple man who has seen one too many action films. The pair then begin to unravel a secret hidden in this farm town.

-“The World’s End” is a sci-fi adventure where five high school friends go back to their hometown to conquer a pub crawl that bested them the day they graduated, twenty years ago. The once young gang is now mature men with suit jobs living the content adult life. Well, most of them anyway. The leader of the gang decides to rally everyone for one last hoorah back in their hometown as they catch-up and reminisce about the old days. The walk down memory lane is short-lived as they discovered something else has changed about their town besides themselves. 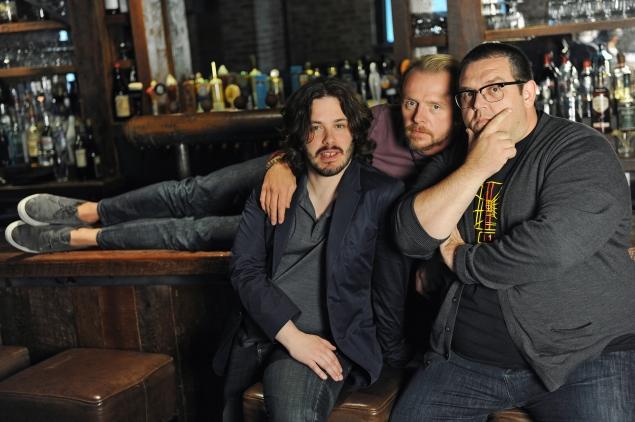 All of these films are packed with subtle hints of foreshadowing to what is come in the story’s plot and mini character stories taking place in the background. Once you are aware of this factor, it makes re-watching these films all the more enjoyable the first time through. The more that you watch these films, the more you will learn to love their artistic style.

A common element for most trilogies is a consistent storyline. “Evil Dead,” “Die Hard,” and “The Matrix” are prime examples of these popular trilogies. The Cornetto Trilogy on the other hand does something different. Instead of the trilogy following a story surrounding the same characters, it shares a common theme. The main theme that Pegg and Wright have written into their movies is the individual fighting the masses and resisting conformity. Wright’s passionate and tenacious directing style combined with his co-writer’s intelligent writing reveals the theme so fluidly. It inspires you to take that theme and expand upon it in each film’s story.

Although the conflict is probably the key theme to the trilogy, don’t be fooled into believing that it’s the only one hidden between the “white” lines. Friendship plays a crucial role throughout and no one demonstrates that better than Nick Frost and Simon Pegg as they are the best of friends offscreen. As they grow up, their level of friendship deepens onscreen making for a much more believable film. Other elements linking all three movies together are actors, jokes, production cues, symmetry, protracted youth, and possibly many more after each viewing. Edgar Wright loves packing in as much as he can into his films where upon each additional viewing, something else can be seen manipulating the viewer’s opinion and emotion concerning the film.

The nearly decade long run of this trilogy is chock-full of history and little experiences that impacted the film’s development. For starters, the trilogy is named for a brand of ice cream included in each film. Its initial purpose was to get a little laugh and get free ice cream while shooting the film. As the shows grew in popularity, so did the meaning behind the ice cream. The red, strawberry-flavored Cornetto represents the amount of blood shed that was to come from the zombie apocalypse, the blue, original-flavored Cornetto to denote police justice and the green, mint-flavored Cornetto symbolizes an alien invasion.

What Edgar Wright, Simon Pegg, and Nick Frost have accomplished in their films is reinstating belief into filmmaking. Developing average characters overcoming tremendous obstacles reflects who these men are as passionate masters of their craft. The messages from their trilogy are countless, but a few that I discovered, taken as a personal and professional fan, are as follows:

Be proud of all of you. The good, the bad, and the ridiculous make you exceptional and embracing that could accomplish wonderful things.

Accept that things in life are going to change. Transformation is an opportunity for improvement.

Friendship is golden. The best things created were designed to be shared.