The men’s soccer team lost a heartbreaking 1-0 game at Jefferson College in the Region 16 championship to end their amazing season. However, that game did not define the Cougars’ season, in which they finished an impressive 14-4-1. Men’s soccer won their first MCCAC conference title and added a plethora of individual honors. The best news of all is that this success was reached with a relatively young team, so theoretically this could be a stepping-stone to even greater success in the future.

The Cougars entered the Region 16 tournament as the third-seeded team, after finishing the regular season 3-2-1 in regional play. SCC opened with a physical 3-0 victory at home against No. 6 Crowder College. A header by Dan McCune off a corner from Fernandez Franco in the sixth minute opened the score. Valmiro Gonzalez added two goals, one assisted by Franco and one by Valrick Fullins. In the semifinals, the Cougars defeated No. 2 MCC-Maple Woods 2-1 at Maple Woods to advance to the final. Jefferson College ended the SCC season with a goal in the 66th minute. SCC had defeated Jefferson both times they had played previously this season. 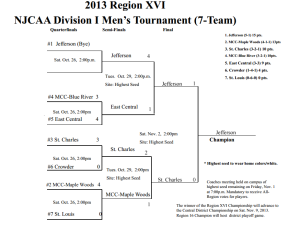 Although the season ended in a disappointing fashion, the 2013 men’s soccer team has plenty to hang their hats on. The 14-4-1 record is a huge improvement from the 2012 campaign that finished with an 8-6-2 record. The team finished first in the Midwest Community College Athletic Conference (MCCAC) with an undefeated record for the first time. As a result, Head Coach Tom Kearns was named MCCAC Coach of the Year. They also improved on the regional record, as they finished 1-2-1 in 2012.

The Cougars leading scorer this season was Gonzalez with 17 goals, while Franco led the team in assists with 15. Both were freshmen. In fact, freshmen accounted for 85 percent of the scoring. However, SCC is losing both their goalkeepers, as well as all but one of their starting defenders

Kearns no doubt has a strong base to lean on for next season. However, to repeat the success of 2013 or even exceed it defenders who played little this season will have to play a much bigger role and a few key additions, especially a keeper, are necessities.