On Thursday, April 3, just over a dozen students alongside a few faculty members gathered in the SCC College Center Rotunda to attend ‘Binge Drinking: What’s the Fuss?’, presented by Shane Roach of the National Council on Alcoholism and Drug Abuse (NCADA). The short and direct presentation went over what binge drinking is and both the long term and short term effects alcohol has on the brain. 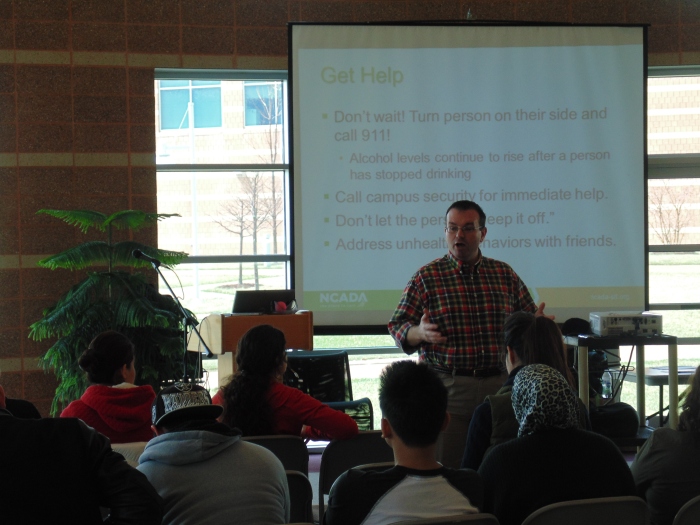 The presentation lasted just under half an hour as Roach tried to fit in everything he could before the majority of the audience had to leave for another class. He made it clear that the purpose of the presentation was not to directly persuade or push anyone away from alcohol consumption, but rather just display the basic facts of binge drinking and allow you to make your own decision.

Roach enticed the audience from the start, promoting discussion by asking questions as opposed to lecturing. As expected the first subjects discussed was the measure of drinks and the proper definition of binge drinking. After allowing the audience to answer a few partially correct answers, Roach confirmed that binge drinking was simply consuming a lot of alcohol in a small amount of time. He stated the rough estimate of drinks in fewer than 2 hours for men is 5 and for women are 4.

After the basics were explained, Roach briefly explained how alcohol can negatively affect the hippocampus, a structure in your brain that is important for both learning and memory. He also made it clear that the human brain is not fully developed until around 25 years old.

At about the halfway point, a member of the audience joined Roach at the front and was equipped with beer goggles. She was instructed to walk a straight line and eventually play catch, but failed at both activities.

Roach then took a big turn and attempted to reach the emotional side of the audience. He explained that binge drinking, especially at such a young age, can be harmful and just one night can take your life. A list of statistics were also presented which concluded that “D” and “F” students drink almost three times as much alcohol as “A” students and 28% of dropouts are alcohol related.

The audience in whole was receptive and often spoke up when invited. Plenty of questions were asked throughout the presentation on almost every subject that was discussed.

To end his brief presentation, Roach reiterated that he only wished to present the facts and encouraged everyone to make their own decision. “The person is going to want to make the change themselves,” said Roach. To conclude the event, Roach offered a table of free literature and thanked the audience for attending.