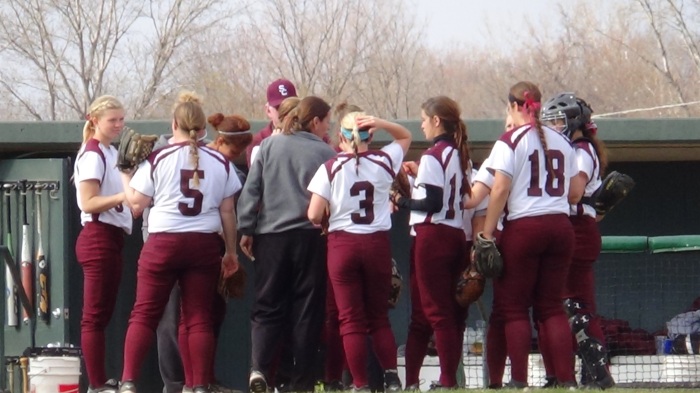 The Lady Cougars’ season has been turbulent thus far, but they have shown flashes of brilliance. Trouble has a tendency to snowball on SCC (4-16) this season, as they have fallen victim to the “big inning.”

“Our pitchers need to a better job working through adversity,” said Head Coach Michelle Patrico. However, when the Lady Cougars have staved off the “big inning,” it’s been a different story.

SCC opened MCCAC conference play with a doubleheader against St. Louis Community College. The Lady Cougars took game one 4-0 thanks to a no-hitter thrown by sophomore Ashley Lutz. The last out was a hard-hit, tailing fly ball that centerfielder Jessica Chadwell tracked down. Lutz was unaware how big that play was until she came to the dugout. “She had no idea until after the game was over that she had a no-hitter,” said Patrico.

The Lady Cougars jumped out to an early 3-0 lead when sophomore Anna Bowden and freshman April Hennen got the scoring started with back-to-back RBI doubles. Lutz helped her own cause with an RBI single. Chadwell finished off the scoring with an RBI triple in the fourth.

After a rough stretch on the road, the Lady Cougars had their home opener against fellow MCCAC member East Central College. SCC won game one of the doubleheader 5-3. Freshman Madison Bradley threw a complete game to get the win. Bradley gave up just two earned runs while striking out four. Hennen had the premier day at the plate as she finished with two hits, including a double and 3 RBI.

SCC picked up its first Region XVI win during a doubleheader with MCC-Maple Woods March 30. After falling to the Lady Monarchs 8-3 in game one, the Lady Cougars won game two 8-7 in an extra-inning thriller. Lutz this time pitched 7.2 innings in relief giving up just two earned runs. Hennen and Lutz both had home runs in the game. Lutz’s turned out to be the game winner as she went deep for a three-run home run in the top of the ninth inning, and SCC was able to quell a comeback by Maple Woods in the bottom of the ninth.

After being swept by Three Rivers on Tuesday, April 1, in a doubleheader, the torrential rains washed out the games scheduled for April 3 and April 4. The games will be made up this weekend.

Maple Woods will come to town for a doubleheader April 5 starting at 1 PM. The Lady Cougars will continue their busy weekend with two games against North Central starting at noon on Sunday.