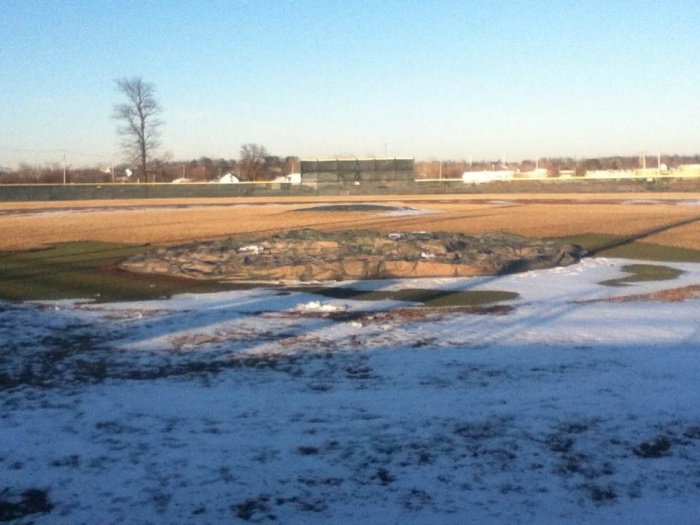 The SCC baseball field still covered in ice before the most recent warm up.

The seemingly, never-ending winter has wreaked havoc on the 2014 spring sports schedule thus far. As of March 9, the only games played by either the baseball or softball teams were played in Eunice, La. over a month ago. The baseball team was scheduled to play their home opener Feb. 22, while the Lady Cougars were scheduled to open their season March 4. In total, 16 games have been cancelled. For full, up-to-date coverage, including standings, statistics, and game recaps visit SCCougarNews.com.

Last season, the Cougars finished 5-33 overall, 3-15 in MCCAC play. However, less than half the team will have memories of that tumultuous season. Eight players (four pitchers, four position players) remain from last year’s team. The captains for the 2014 season are sophomores Spencer Pugh, Austin Boden, and Josh Lachnit. In addition to the freshman class, SCC added transfers outfielder Tony Patchin and left-handed pitcher Scott Huesemann. The projected starting middle infield will be Texan. Michael Crews will play shortstop, while Donnie Havard will play second base.

The Cougars next scheduled home game is March 20 when Three Rivers visits for a doubleheader.

The Lady Cougars ended the 2013 season with a record of 12-25, 8-10 in conference play. SCC returns only three players from that team. Infielder Anna Bowden, catcher Bridget Allgier, and first baseman and outfielder Savannah Teuscher are joined by fellow sophomore, Ashley Lutz, a pitcher who transferred to SCC. Nine freshmen make up the rest of the roster.