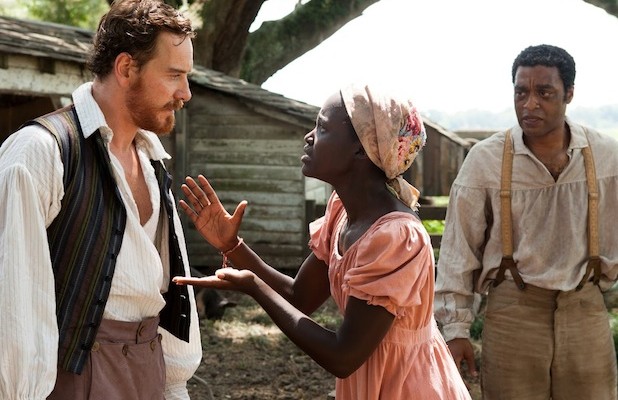 Patsy (Lupita Nyong’o) stands up against her owner (Michael Fassbender) for the little joys she still has left.

It’s never an easy task to tackle the sensitive truths of humanity. Discipline, consideration, and no matter of vulnerability is required of all those who have their hand in telling a story based off historical facts. For a cast and crew, primarily consisting of British talent, to make a film to truly recreate life in the south of the United States during the time of slavery and have it be poignant makes ’12 Years a Slave’ a film of serious power.

Steve McQueen’s directing is one to remain arguable. The cinematography, acting, effects, and make-up no doubt combine to project unseen emotion onto the screen, but the mountain of small choices and possible errors weigh this film down. His hasty editing style and unsavory camera angle choices can distract the viewer and lose touch with the film. On the other hand, his longer shots and use of soundtrack are subtle royalties in this film as they are used rarely and with such elegance. Although, the screenplay itself was a risk of its own, I don’t feel Steve McQueen took many risks, choosing to keep it simple and straightforward in terms of direction.

The acting artisans execute their performances in this film with such passion, it’s impossible to look away. No matter how disturbing a scene may be, the actors force you to watch as they are tormented both physically and spiritually. As you follow Solomon Northup (Chiwetel Ejiofor) along his journey from freeman to slave and back to freedom, you cannot help yourself but dwell upon your own acts of guilt and suffering and let it become a part of the film. Everything from his gentle appearance to his untamed spirit is well worthy of credible recognition. This is Michael Fassbender’s third time acting for Steve McQueen. Fassbender’s role as a plantation owner and corrupt man of God oozes all that is evil in this film. Playing the antagonist must have become second nature to Fassbender after his Oscar nominated performance in ’12 Years a Slave.’ The extras and supporting members of the cast deserve praise. Not one person lacks or falls behind alongside the others while on screen.

The film begins with Solomon Northup experiencing another emotionally damaging day in the life of a slave. It then takes you back to when the protagonist was a free man living in New York when two businessmen come looking to employ him for a couple weeks. Little does Solomon know that these men have schemed to sell him into the slave trade by illegal means. Solomon then begins to understand how to live his life in obedience while trying to free himself at the same time. He learns that patience is the key to overcome the evil that has entrapped him.

Many films have covered the topic of slavery, but never was there a better story of perseverance and humanity than ’12 Years a Slave’. The technical aspect of this film isn’t solid, but the story comes from the heart and soul of everyone who had a hand into making this equally inspirational and disturbing movie.