The engines roar, the fans scream and the pavement is steaming from the heat of the talent from this year’s new Ron Howard film, “Rush”. In first place, the story of two Formula One race car drivers: the by-the-book Austrian prodigy, Nicki Lauda (Daniel Brühl) and the cocky, hot-headed Englishman, James Hunt (Chris Hemsworth). To call them close enemies is a fair depiction of their relationship as they clash egos as one professional driver to another. Hemsworth leaves his hammer in Asgard as he was perfect casting and he accurately depicts the playboy antics of the character that helped to bring a broader fan base to the sport in the 1970’s. His natural German accent aside, when Brühl spins yarns about loose fan belts and the handling of Ferrari’s latest flagship his confidence and affirmation of speech is truly intimidating. The he-speaks-and-you-listen aspect is true to character, and help Brühl embody the role. If Hemsworth is the film’s machine, Brühl is the films soul.  Their hatred for each other can only be matched by the respect shared between the two when one driver suffers from a critical, life-altering racing accident. In an age were blockbusters like “The Fast & the Furious” take home box office gold, it is normal to understand why some would think that films that deal with cars and racing as the subject matter don’t hold weight in critics circles, all action no acting or message.

The film takes place in the mid 70’s and it is the key elements in the film that smoothly transport the audience back to a time of sex, drugs, and race car driving. Arguably, the movie looks like it was shot through an Instagram filter but it is worth noting that the lighting is truly a captivating visual that keeps your eyes on the screen as cars burn pass each other or when the characters discover conflict inside themselves. The soundtrack to this film is exceptionally timey and is wonderfully accompanied by the reputable Hans Zimmer. 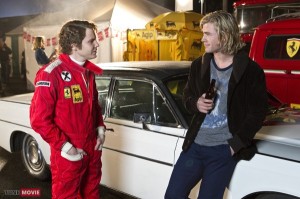 Now for all the car buffs out there, this film is simply beautiful. One of the film’s greatest strengths is that it clearly represents the dangers of automobile racing; and how this danger affects both characters, is portrayed well on screen with this directly influencing character development. The films is enough eye candy to give a car nut a heart attack, from the vintage race cars, to recreating the race tracks, uniforms and correct vintage advertisements. Driving sequences are expertly crafted with metallic sounds and sights of pistons and valves moving up and down, gears being selected, and pedals being pushed help add a level of grit and danger to what is happening in the film both on and off the track. As an extra tasteful measure, a couple renowned names in racing are subtly placed in the film.

In closing, “Rush” is a fantastic venture into the world of automobile racing and what it means to not only the fans of the sport, but the drivers who risk their lives every time they turn the key and press the start button. Ron Howard delivers a truly authentic feel to the film with its extreme ability of bringing real drivers to life. Its message of knowing what is truly important and that happiness can win in the end is exactly what a car film should be, not just epic stunts and a great soundtrack. Along with its message of chasing your dream in the face of death, Rush buries the accelerator to the floor, in terms of look, feel, content, sound and cast and while not perhaps 100% accurate, we have no doubt that the film will eventually live on in the minds of gearheads alongside classic racing films and film history. This is one film that does not try to feel like a documentary, but brings the art of Formula One racing from the track and rushed to the masses for the price of admission.